Melissa is the first studio album by the Danish band, Mercyful Fate. The record was recorded July 18-29, 1983 at Easy Sound Recordings in Copenhagen, Denmark and released October 30, 1983, by Roadrunner in Europe (the record company’s first release), Music for nations in the UK, and Mega Force in the USA.

Interestingly, the album (and the band) are, obviously listed in the Heavy Metal genre, but also the Black Metal genre. Like Slayer (listed as Heavy Metal / Death Metal), from the same era, it is not the lyrical delivery that determined the category, but the lyrical content. Mercyful Fate (and Melissa) are renown for the occult – demonology, witchcraft, and Satanist – subject matter.

The (now) legendary King Diamond, with his operatic vocals (notably, his usage of falsetto) and death mask face paint, wrote and performs all lyrics. The band is solidly rounded-out by the awesome Hank Sherman (guitar; composer of all songs), Michael Denner (guitar), Timi Hansen (base), and Kim Ruzz (drums). Melissa clocks in at 40:09 long, while containing seven tracks.

It was planned to be an eight song record, with a cover of, “The Immigrant Song” (Led Zepplin), but the band decided it did not fit well with the theme and feel of the rest of the record. Included in the seven track selection, clocking 11:23, is the epic, “Satan’s Fall.” The song, according to the band, contains 16 different riffs, and took “forever" to learn because Sherman kept adding parts! It was the band’s longest song for many years. One single was released for the record, “Black Funeral,” with a B-side, “Black Masses" (a song recorded during Melissa, but not making the final cut).

In 1985, the Parents Music Resource Center (PMRC) cited “Into the Coven" among their Filthy Fifteen (their list of objectionable songs) because of its occult content. In 2017, Rolling Stone ranked Melissa at 17th on their list of ‘The 100 Greatest Metal Albums of All Time’.

Melissa is simply one of the best Metal albums on the market and a MUST HAVE for the serious metalhead! BTW, Mercyful Fate have reunited and are touring during the 2019 season! Catch them if you get the opportunity!

The Saw sits down with a KNC legend: the one and only DJ Beowvlf, host of The Local Beat and our General Manager! The two chat about the station, getting into Metal, and Beowvlf’s favorite metal band.

The Saw sits down with a KNC legend: the one and only DJ Beowvlf, host of The Local Beat and our General Manager! The two chat about the station, getting into Metal, and Beowvlf’s favorite metal band.

Back in the day there used to be these memes called, “Just Girly Things,” and they would just state things that are considered “girly.” 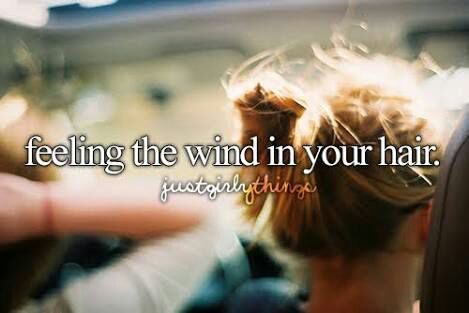 There are various memes out there that make fun of “Just Girly Things” that are very amusing to look at. One of my favorite themes are the ones regarding metal. Here are some ~~Just Metal Things~~ that all of us metalheads can relate to.

When the breakdown gets slower and heavier

Isn’t this the best feeling? When a song does this I automatically throw my hands up and punch the air. Kinda like this:

When the start a mosh is called

“ALRIGHT LEFT TO RIGHT, FRONT TO BACK. NO ONE STANDS STILL,” or “MOVE MOVE MOVE MOVE,” or just a casual “2 STEP.”

I go through this every single day.

When the two shades of black you’re wearing match

This is a miracle when this happens. 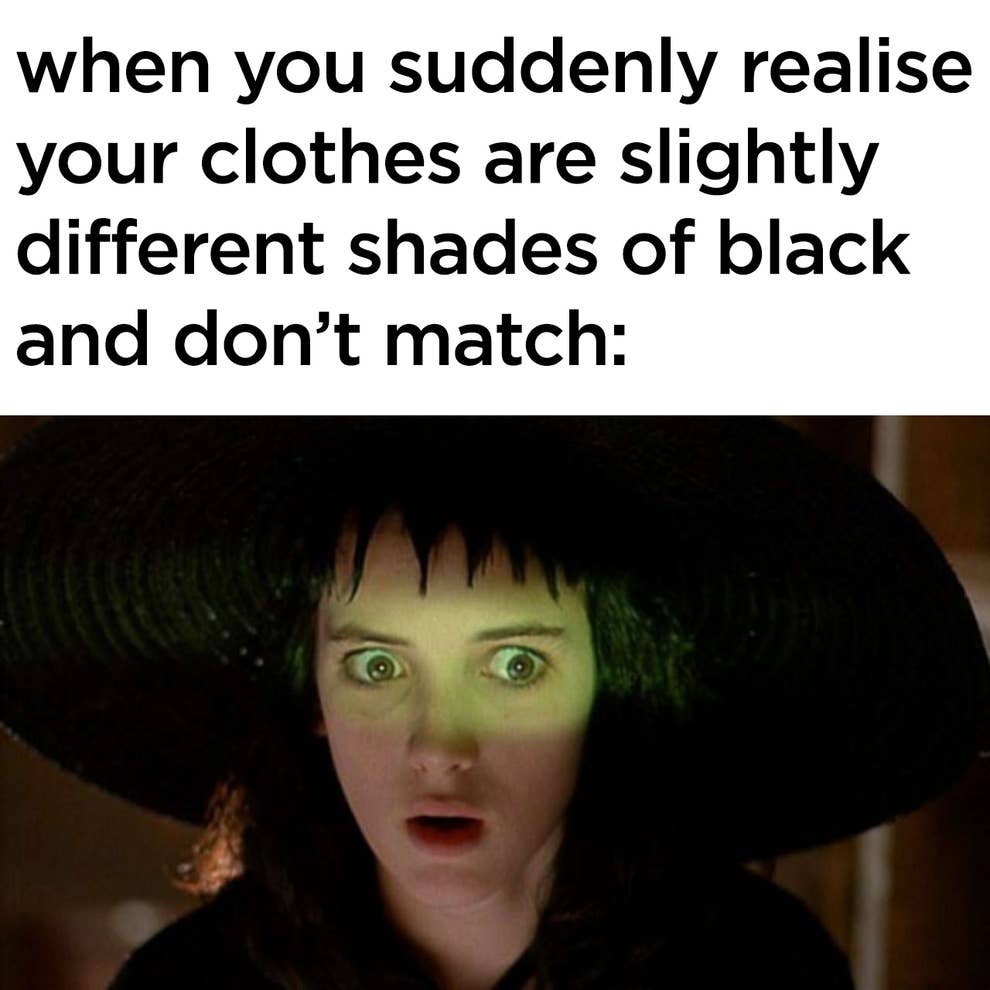 When the song has a good “blegh” or guttural

Okay, I know I said that when the breakdown gets slower and heavier is the best feeling, but a good “blegh” or guttural during a breakdown is nasty as hell. 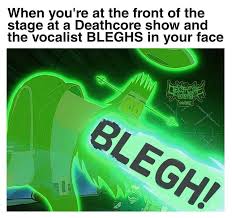 Here are some of my favorite “Just Metal Meme” 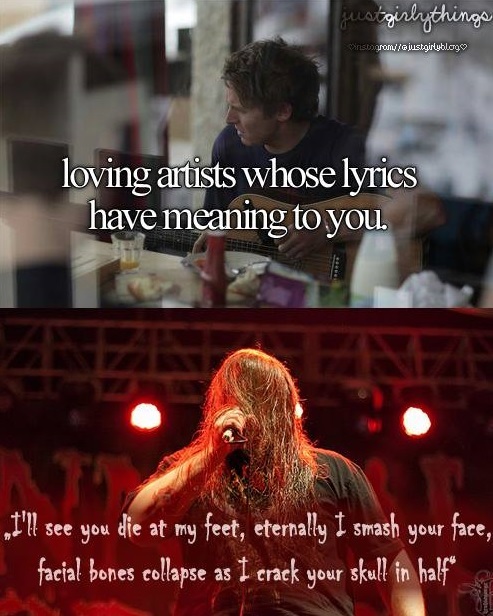 The Saw and Jeffrey discuss how he self-taught himself to play the drums and the guitar, how he became a vocalist, and his fight against cancer as well as how Infirma’s new release will be about the emotions Jeffrey went through during those years of his life.

The Saw and Jeffrey discuss how he self-taught himself to play the drums and the guitar, how he became a vocalist, and his fight against cancer as well as how Infirma’s new release will be about the emotions Jeffrey went through during those years of his life.

I have been in the metal scene pretty much my entire life. My parents are metalheads, my brothers and cousins were in metal bands growing up, and when I turned 16, I started going to shows with my friends. Metal music is something that will always be there for me and I will always love going to shows. I am often asked if, as a female, I have had negative experiences at shows. There have been some instances that are frustrating. These unpleasant interactions do not happen at every show, but I do think it is something that I should share with all of you.

When I attend shows, I am there to jam. I want to sing along to my favorite songs, mosh, dance and headbang. I do not want to be questioned about what I am wearing, who I am there with, and I am especially not at a show to be interrogated by some concert-goers to see if I fit their standards of a “true” metalhead.

Here are a few of the encounters I have been a part of, which puzzle and perplex:

“Are you here with your boyfriend?”

Here are the only two conclusions I can draw based on this statement: Either, this is the best line that he can come up with, or he really thinks that I wouldn’t be here to enjoy the music and the bands on my own.

A club owner talking to a promoter about me, “Are you going to tap that?”

Oh, where to begin?! First, why would you think that this is an acceptable question while I am standing right there?! Is this some form of passive aggression? Was he projecting? Secondly, it’s not professional. It’s rude, ignorant, and it’s chauvinistic. And finally, the promoter’s response was just as obnoxious, “Not yet.” For me, while there may be people who are impressed with these titles and positions, I am not.  Where I come from, this calls for an ass whoopin’!

I went to a death metal show, and my friend was the only girl to crowd surf. After the song, the singer of the band commented on what she was wearing. The guitarists concurred with “Thanks for the show.” One: You will not tell me (or anyone) what we can and cannot wear. Period. Two: I am here to watch you perform, shut up and play. For these particular individuals, when I turn the crank, you dance, monkey!

This is called “Quid Pro Quo,” and it’s Latin for something for something. I wanted to interview a band, and this was their band manager/merch guy’s response.

Do I really need to say something about this? This is like a crime of opportunity. Because I’m there, you think it’s okay? Why the objectivity? Is there some kind of sick pleasure? At a show one time, a girl tried to get in front of me (because I was at the barricade). When she couldn’t move me, she enlisted her boyfriend to make me uncomfortable. So, I headbutted him. Why is it okay for your boyfriend to treat a woman like this?

“Are you a groupie?”

This is an (over) generalization. I go to shows to enjoy the music, the performance, and the community, etc. While there are groupies, it doesn’t necessarily follow that all women at shows are groupies (or someone’s girlfriend).

What I mean is, some think that I should have to answer basic questions to prove that I like metal (and not just wearing the merch as some kind of fashion statement). Because someone doesn’t share your opinion on a band, song, or singer, etc., it doesn’t make that one any less of a metalhead. The real question being asked is, “Why are you here?”

Again, more often than not, I have a great time at shows. I love seeing/meeting the bands, making new friends, hanging with old friends, and just having a good time. Although there have been some undesirable moments, it does not reflect on the metal experience for me. I will continue to go to shows and jam.

The Saw interviews Courtney Breen, a new type of guest in the station – a photographer! Listen to learn what it’s like to be a photographer at a metal show and how she got her start.

The Saw interviews Courtney Breen, a new type of guest in the station – a photographer! Listen to learn what it’s like to be a photographer at a metal show and how she got her start.