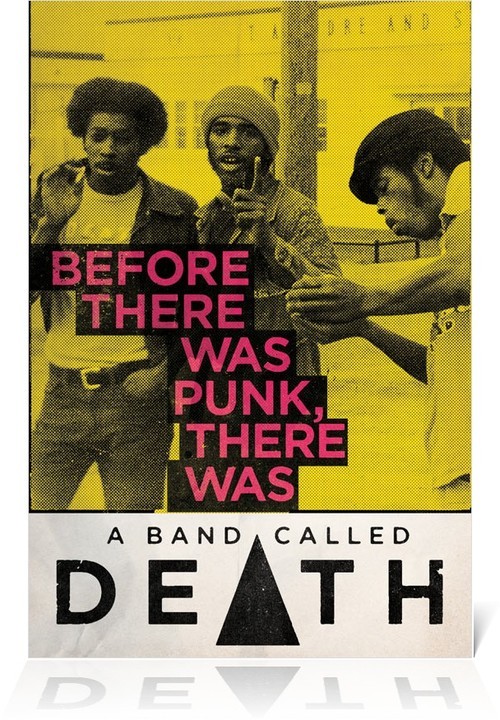 If the second category describes you, fear not. I am giving you a chance to become enlightened.

“Why should I be excited about Death?” you ask.

The story of Death is so compelling that it almost seems fabricated. Where do I start?

How about Detroit, Michigan, 1973. Three teenage brothers – David, Dannis, and Bobby Hackney – growing up in the black community at a time when Motown music predominated. Think Earth Wind and Fire, the Temptations, Smokey Robinson. The Hackney boys, led by charismatic David, had long been immersed in music. Their father, a Baptist minister, had fostered and encouraged their interest from a young age by exposing them to the Beatles and a wide range of other artists. The close-knit family did not have a lot of money, but the boys were able to get their hands on some instruments. Their first incarnation as a band was a logical choice considering what was popular in their community at the time: a funk outfit, called Rock Fire Funk Express.

In 1973, everything changed when David saw The Who. The brothers quickly became obsessed with this new kind of music – pure rock and roll. Inspired by Alice Cooper, Black Sabbath, and Iggy and the Stooges, the band went in a completely new direction: and changed their name to Death. The brothers would play in their small bedroom-turned-studio. They were heard, though not necessarily enjoyed, throughout the neighborhood.

This is where things get important historically. This was 1973 – several years before The Ramones would burst onto the scene and essentially start the punk movement. But here was Death, playing proto-punk (although they didn’t know it, since punk didn’t exist yet). No one at the time was playing anything on their level. The raucous energy, the huge riffs, the politically-charged lyrics, the snarling and screaming vocals, even the band’s name itself – they were totally against the grain.

Unfortunately, the world didn’t seem ready for an all-black punk band called Death just yet. The Hackney brothers faced rejection after rejection from record labels. Most notably, they turned down a $20,000 contract with Clive Davis (Columbia Records), who liked their music but wanted them to change their name. David, the group’s spiritual, creative, and emotional leader, was outraged, and the deal collapsed. By 1980, the brothers were sick of the rejection and went their separate ways – Bobby and Dannis to Vermont, David back to Detroit – after only ever putting out one self-released EP.

This could have been the end of Death. Bobby and Dannis formed a reggae band, and David continued to make music by himself until his death from lung cancer in 2000. Shortly before he passed, David had given all of Death’s old tapes to Bobby for storage with the promise that “the world would come looking for this music after he died.”

And, in an eerily fitting twist, the world did.

Nearly 35 years later, some record-collecting nerd found that self-released, two-song EP in a record store and realized that what he had just bought was not only some really sick shredding, but also a lost piece of music’s cultural history.

He headed straight for the internet and Death was soon being spread around, shared, and enjoyed, creating similarly stunned reactions wherever it was heard. The two remaining members of Death, Bobby and Dannis, had no idea this was happening until Bobby’s son, Bobby Jr., heard a friend raving about Death and recognized his father’s voice on the tracks. The buzz grew and reached the attention of Drag City, who contacted the brothers about releasing the old material – unheard since the 70’s – as an album. In 2008, Death released its first album, …For the Whole World to See, recorded in 1973. Finally, David’s dream had come true.

In many ways, Death represents rebirth.

Bobby’s sons, Bobby Jr., Julian, and Urian, were so inspired by their father’s and uncles’ music that they formed a band themselves. They called it Rough Francis, after the name their uncle David used for his solo work. Rough Francis started out as the boys’ tribute to Death; they just wanted people to hear the songs that had been collecting dust in an attic for decades, songs that had never been played for a live audience before. Now, Rough Francis writes and records their own music, though they still pay homage to Death at every show.

Another important rebirth: after the album release, Bobby and Dannis began playing Death’s songs again (with the guitarist from their reggae band filling in for David) for the first time since 1980. They have even done some touring since then, and released some new material in the form of a single. Drag City has put out two more full-lengths of Death’s archived material. This band, the would-be pioneers of punk, is now finally getting the recognition it deserves.

When Death takes the stage at City Plaza on September 6th, the songs they play will be old; probably older than many of the festival’s attendees. But they will still ring true. For Bobby and Dannis, playing the songs they wrote with their brother is a deeply spiritual and emotional experience. From 1973 to 1980, no one wanted to hear what Death had to say.

But this time around, the world is ready to listen.

Author’s note: I did a lot of my research for this article while watching the incredible documentary, “A Band Called Death,” which is available for streaming on Netflix.