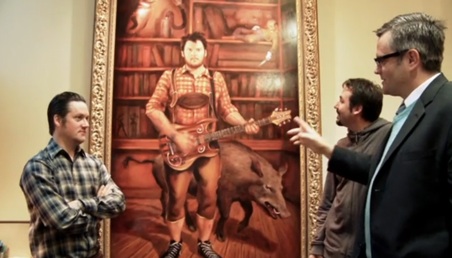 1. Following a handful of terrible news, Interpol has announced that they have a new bassist in David Pajo. The band has also announced their upcoming album will be called Interpol and is set to release sometime in September. (via Pitchfork)

2. Luke Steele of Empire of the Sun has revealed that he hasn’t spoken to his bandmate Nick Littlemore since last February. But Steele isn’t put off by not seeing Littlemore saying, “Once it (the tour) starts it becomes the norm. You’ve got to keep the show on the road. This is rock ‘n’ roll.” (via NME)

3. Portland Mayor Sam Adams has, among other things, a portrait of Modest Mouse’s Isaac Brock. The singer, who is standing in front of a boar, dressed in lederhosen, and holding a guitar, recently stopped by the mayor’s office to see the portrait that Alexander Rokoff created in person and answer a few question with the artist about it. (via Pitchfork)

4. MGMT has released rather specific details on their new audio recording at live shows. The band will have special sections at live shows where fans will be allowed to record the band and they will be prohibited to record anywhere outside of this reserved area. The band is still prohibiting video recording. (via NME)

5. Belle and Sebastian has announced their first tour in quite some time. The band is planning on a short tour with about nine dates in the U.S. in the fall. The band is also close to finishing off their next album saying they were in “final stages of recording the new album.” (via Spinner)