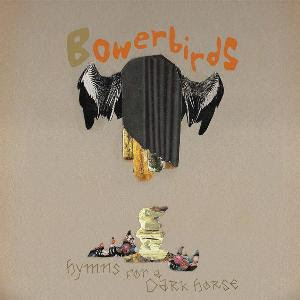 I haven’t had the chance to do much music buying lately, as my bank account’s been slightly restricting as of late. However, my birthday is this coming weekend (Valentine’s day, a blessing and a curse) and I’m using that as an excuse to head over to Schoolkids and buy me some new jams. What kind of jams? Well, there’s only three non-local records that are on my list right now (new ones from Animal Collective, Antony & The Johnsons, and Bon Iver). There are several local records, however, that I really want. First off, there’s Hymns For A Dark Horse and Bury The Square, the debut records by Bowerbirds and Megafaun, respectively (Megafaun have a new one on the way and if the new songs they played the Cat’s Cradle show I caught recently are any indication, this one will be just as great as the first). I’m headed up to Boone this coming weekend and both bands’ take on folk (Bowerbirds’ being dark and haunting, Megafaun abstract and rambling, both reflective) would serve as an excellent soundtrack to a weekend driving around the mountains. Then there’s the new debut from The Love Language, with their excellent lo-fi take on 50’s pop. Lonnie Walker, with their rambling folk rock, are quickly becoming one of my favorite bands, and I’m holding my breath waiting for the release of their debut record, as well as the new one Schooner is working on.

One of my favorite releases of the past decade was Hotel Lights’ self-titled debut, full of melancholy and beautiful folk-pop gems. I’ve spun their new one, Firecracker People, on my show a few times, but have yet to pick the record up This must change, as everything I have heard off the record has been excellent. I’ve managed to catch EAR PWR’s dance party live show three times within the past couple months, and am dying to pick up some of their records. Same goes for Greenville ex-pats Future Islands (who also have some great new songs). There are great new records from David Karsten Daniels and Gray Young. My record collection is calling out for the wonderful, Cat Power-like musings of Alina Simone. New ones from I Was Totally Destroying It and The ExMonkeys are on their way. The fact of the matter is, out of all the new records coming out, for the most part, the best ones seem to be coming either from acts right here in North Carolina or NC ex-pats. And that’s saying something. Time to go buy me some records