I bought tickets for this show completely out of the blue. I was telling my dad about the band Traitors and we were listening to their music (seriously, this band goes hard! Look up the song, Nu Hate). So while we were listening to them my dad says, “You do know they are going to be in Fayetteville on Tuesday, right?” I went online and bought tickets real quick. I also knew some of the local bands that were playing at this show (like VALLEYS, those guys are awesome).

All local bands put on a killer show! Unfortunately, the crowd didn’t get involved until VALLEYS hit the stage. The first local band was Constellation Atlas, and they freaking jammed. Some guy fell out during their show (don’t worry, homeboy got up and continued to crowd kill [borderline moshpit but insteading of pushing people, one intentionally tries to hit, punch, or kick someone else] after a few minutes). The next local band was HEFT, and like the first band, there was only some crowd involvement. The next band Live For What Lasts had the same thing occurring with the crowd but I was really excited to see them because they are from my hometown!! It was cool to see some locals hit up the stage! I didn’t get to meet them but you already know when I see them around I’m going to tell them that I saw them live!

VALLEYS was next and I was really excited to see them! They were another reason why I went to the show because I saw them perform last year when I saw After The Burial and Emmure (pictured below). I met the guitarist and drummer during that show. Now the crowd got into this band and there was a lot of crowd killing. I love the stage presence of these guys, they are always interacting with the crowd and incorporating them within their show. After their set, I went outside and I ran into the band. I was wearing my WKNC Media Pass and one of the members came up to me and asked me if I was a DJ. They also recognized me from the After The Burial and Emmure show last year. I talked to them for a couple of minutes and they are all such nice guys. They are in the studio now so be on the look out!! I play them during The Saw’s Butcher Shop in my “Local Butchers” segment. Maybe The Saw will be talking to them soon? 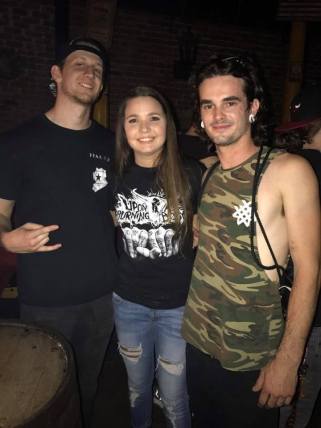 MESS, another local band from NC, played after VALLEYS, and I was really impressed by them. They had the entire venue rocking!! So many crowd killers and mosh pits occurred during their set. This was my first time listening and noticing this band, and I’m sure glad I did. They are a really good band! I talked to their lead singer (who is also the drummer) after their set and he is such a sweetheart (pictured below). I told him that I am a DJ for WKNC and that I would love to interview them and play their song during my set!

Seriously, go check out these local bands, they are really good. The Saw approves.

The next band to take the stage was Signs of the Swarm. Oh my god… these guys are REALLY good. If you like heavy breakdowns, blast beats, gutturals, and pig squeals then this band is for you. The singer was in the crowd’s face the entire time. His voice is insane!!! How he transitioned to growling, screaming, to gutturals, and then to pig squeals was awesome (it is difficult to do these transitions live on stage). One of the best singers I have seen/heard. He was literally hovering over the crowd while singing. I was really impressed with them. I never heard of them until that night and I am glad that I have discovered them. They are easily becoming one of my favorite deathcore bands. There was an insane pit for these guys and the crowd absolutely loved them. I don’t think there was a single person in that room standing still. They played some of their well-known songs such as Cesspool of Ignorance and The Failed Breed. I met the singer and the drummer after their set. They are some of the sweetest and coolest guys I have met (pictured below). Me and the singer have matching Medusa tattoos so we bonded over that. I talked to them for about 10 minutes and then headed back inside to see the next band.

The band I have been waiting for: Traitors. These guys sound the exact same live as they do on record. I met the lead singer (pictured below) at their merch booth before the show and he looks like a young Corpsegrinder (seriously, if I didn’t know I was seeing Traitors, I would have thought Corpsegrinder was at the show). The singer has a great stage presence and he really gets the crowd rowdy. There was a lot of crowd killing and some actual fights broke out here and there. But overall, their set was pretty fun! They played two of my favorite songs: Nu Hate and Short Fused. They just released their new record, Anger Issues, go check it out! 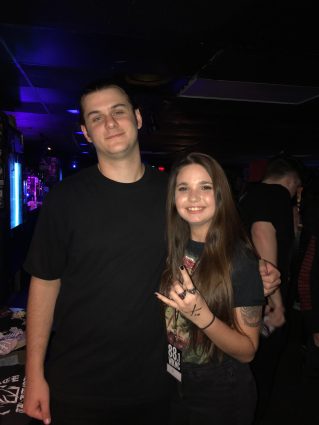 The last band to perform was Lorna Shore. I have heard of these guys before and I was excited to see them live for the first time! Most of the people left after Traitors which is pretty disappointing. But that didn’t stop Lorna Shore from putting on a killer show!! This band is also another deathcore band and they are touring with Signs of the Swarm. When the band came out, the crowd killing began (not surprised). But, something weird happen in the mosh pit during their set… a dance off began. There was a handful of guys doing the “Souja Boy,” whipping, twerking, nae nae, some weird slow-motion dance, spinning on the floor, and some vicious dabbing. Seriously, homeboy was dabbing so intensely… it was so hardcore. What got me was that some guy busted out the worm and everyone went insane. I have never seen a dance party happen during a show before. We all started a huge pit of the Macarena, it was the best mosh pit I have ever been into. They were doing these dances to Lorna Shore and it was just funny to see these dances to metal music (and the dancing was off-beat I may add). I gotta be honest, no one was watching the band at this point… everyone was watching us dance in the mosh pit and throwing in our best dance moves. The lead singer from Signs of the Swarm came on stage and played a song with the band for his birthday. Some of the songs that they played were Life of Fear and FVNERAL MOON.

To sum up last night, it was something I have never experienced before. This show was at a small pub and there was around a hundred or so people that showed up. Although the crowd killing got annoying, my overall experience at the show was great! I got to run into some friends, meet some awesome bands, and witness a dance party!! I enjoyed my time at the Drunk Horse Pub. It was my first time there and I really liked the atmosphere. It was a very laid back environment. They have pool tables, a bar, and a seating area. You could walk in and out of the venue and hang out and meet all of the bands if you wanted to. The stage was small and so was the standing area in front of the stage, but this made for a intimate show. I would go back to this venue to see a band anytime!  If you get the chance to see any of these bands, please do. They are all so talented and I promise it will be worth it.