The life of a metalhead can be difficult sometimes. There are some things that we just struggle with, such as finding fellow metalheads, figuring out which band is your favorite, when you rust in the shower because you’re so metal, and clothing attire. Nothing bothers my OCD more than wearing all black but different shades of black (trust me, it happens often). I am going to give a few problems that the majority of metalheads go through. You will be able to relate to these things; trust me.

1. Getting dirty looks in public because of your band shirt.

This is the look I get all the time when I’m wearing a band shirt (which is almost all the time). I don’t know, what is the big deal, if I’m wearing a shirt that has a bloody torso on it out in public? It’s my casual wear!!! Some of the shirts that I have you can’t even read the name of the band. I like those looks because people try so hard to read my shirt. Jokes on them because I can’t even read my shirt either, so please don’t ask me what it says. If I’m at a metal show we bond over our metal shirts and it is a form of mating call for me. When I see someone wearing a band shirt, I automatically go up to them and tell them I like their band shirt. So don’t worry, if you see me out in public and you’re wearing a band shirt, you will get a very excited look, instead of a dirty one. 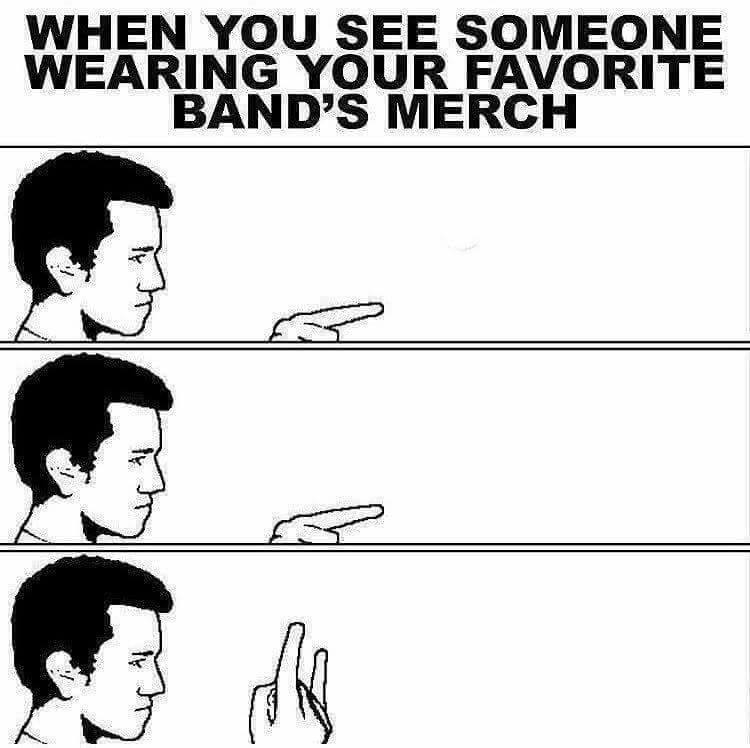 2. People who think metal and screamo are the same thing. 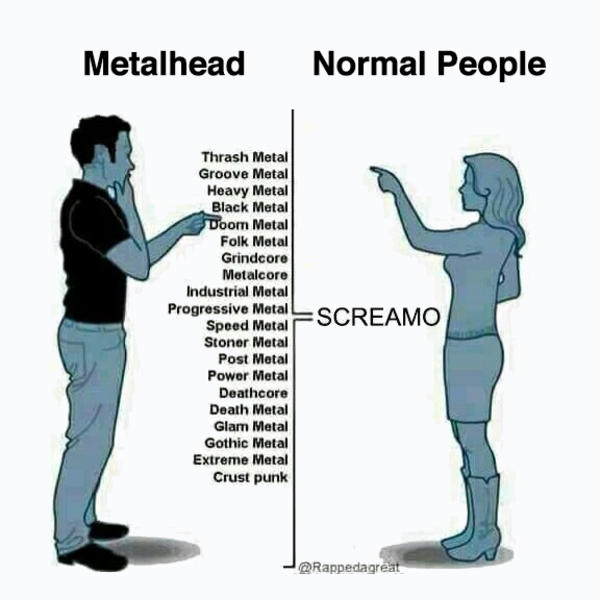 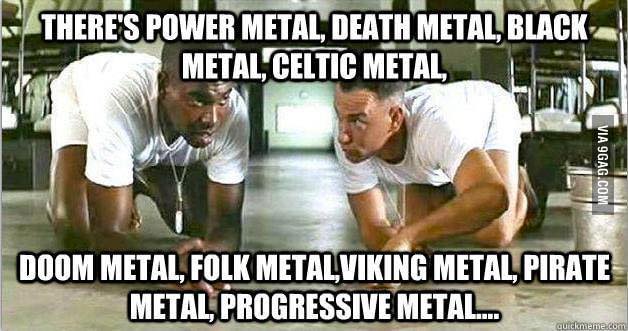 3. When people think you don’t qualify as a metalhead because you don’t look like the average metalhead.

Before I got tattoos, I didn’t look like a metalhead at all. But now, I kinda fit “the look” of a metalhead. You know… long hair, band shirts, ripped jeans, black finger nails, combat boots, leather jacket, and tattoos. When I was in high school, I wore band shirts but I didn’t really “look” like a metalhead. Here’s the thing with metal and music in general, you can be anything you want to be and look like anybody you want. Music doesn’t judge. Every once in a while, I get the “you listen to metal? But you look so sweet!” * Insert eye roll here * Since I’m a girl, some people don’t believe that I am a true metalhead. But they can all think what they want. I have met and seen more bands than they ever have. * flips hair *

4. Having no one to go to metal shows with because none of your friends listen to metal.

I have never related to anything so much in my life. None of my friends in high school or college listen to metal so when I fan girl about my favorite bands coming to town they just look at me like I’m crazy. They also don’t understand the band names like Dying Fetus, Cannibal Corpse, Analepsy, and Upon A Burning Body, etc. BUT I have met some friends at shows (what up Nate, Jake, Josh, Justin, Eric, Amie, and Savannah?!) Every time I go to a show, one of them is always there. I have met some of my best friends at metal shows and I am grateful for every single one of them. Have no fear my fellow metalheads, if none of your friends from school/work listen to metal, just make some friends at shows. They are literally the best.

5. People mistaking you as a “Satanist.”

Yes, because I listen to metal, I want to burn down churches and draw pentagrams on everything. NO I DON’T WANT TO DO THAT!!! Just because I listen to “darker music” doesn’t mean I worship the devil. Yes, some metal bands do talk about satanic stuff but that doesn’t mean I believe in it. Believe it or not, some metal is positive and talks about personal problems. Metal is an outlet and it really helps people get through things in their lives. I haven’t listened to any other type of music that I relate to as much as metal.

6. Being a girl and seeing male metalheads that have nicer hair than you.

Okay, this just isn’t fair. Like why do y’all have to have better hair than me? It always looks good and luxurious; how does this happen? It is rare that I see guys with nice hair, and if you are a guy with nice hair and tattoos (like the one pictured above), WHERE DO I FIND YOU?!

7. Dreaming of only dating a metalhead because they are the only ones that understand your love for the music.

This picture describes me perfectly when trying to talk to a guy. I honestly believe that my husband has to be a metalhead (or be open to the idea of listening to metal) because I’m in too deep with the music. The first question I ask a guy is “what type of music do you like?” I’m usually shocked if they do say metal. I only meet metal guys at shows, if I randomly meet one not at a metal show I am ~~~SHOOK~~~ It would be weird to not date a metalhead because I will drop everything to go to a show. I’m always at shows and I will never give that up.

8. When you can’t find your black band shirt in the pile of black shirts.

Do you know how difficult it is to find a specific band shirt when every shirt in your wardrobe is black and/or is full of other band shirts? IT IS REALLY DIFFICULT!!!! Like I will be looking for my Whitechapel shirt and I will pull out my Suicide Silence shirt. Yeah, I like my Suicide Silence shirt, BUT I WANTED MY WHITECHAPEL SHIRT AND IT IS REALLY DIFFICULT TO FIND WHEN EVERYTHING IS BLACK. I have a struggle every day because of this. It will never get easier.

9. When your friends invite you to a party but you don’t want to go because you know you will hate the music.

This is me during any social interactions at anything other than a metal show. I will go to parties with my friends and I see everyone dancing and I just stand there confused. I can’t headbang to this. I can’t even mosh to this. How is this fun? I just don’t understand. Someone please explain this to me… looking for a friend.

10. When none of your nonmetal friends understand metal memes. 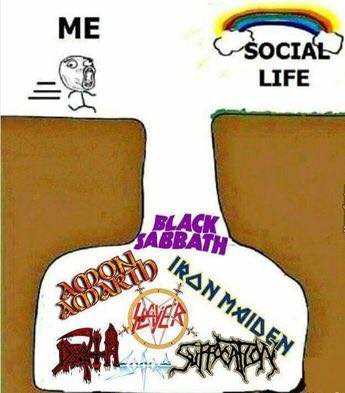 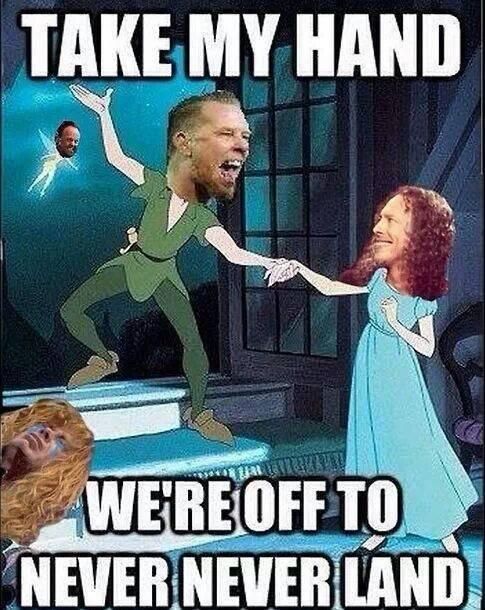 This should be self-explanatory. Metal memes are great and I can only send them to certain people because the majority of the people I know will be so confused. I think metal memes are the best and some are the dankest. If you have any metal memes, send them my way. I love memes.