If there is an insect that represents the feeling of summer, I would argue it is the Cicada. At an afternoon baseball game or cook out, a chorus of male cicadas are there providing a soundtrack, doing their most animated singing at the warmest point of the day. This association between summer and cicadas is not unique to North Carolina or North America for that matter. Cicadas are found on every continent, with the exception of Antarctica.  In fact, there are 2,600 described species in the world ranging from very large (110 mm) to relatively small (14 mm), most of which are members of the family Cicadidae. The other family of cicadas, Tettigarctidae, is a very small and relictual group that is represented by two species present only in Australia. These Australian cicadas are known as the hairy cicadas and communicate by transmitting vibrations through vegetation instead of singing like the Cicadas we are familiar with.

The members of the family Cicadidae sing using organs called tymbals which are located on the abdomen of the males. The tymbal is like a drum. A complex membrane with taenidia-like striations running parallel along the surface and as the membrane vibrates and the enlarged chambers within the trachael system in the insects body act as a resonating chamber. 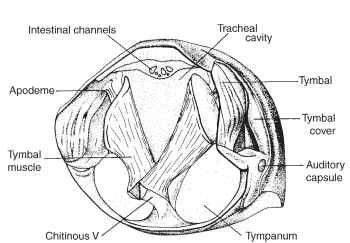 The life cycle of cicadas is pretty neat, a female cicada will lay eggs into the twigs of a woody host plant using a lance-like ovipositor. When the nymph hatches it drops to the ground and, using it’s fossorial legs, burrows into the soil where it spends the majority of its life feeding on juices it sucks from tree roots. The cicadas we are that we hear every summer are known as the dog-day or annual cicada. The latter name is actually a misnomer. Many believe that the dog-day cicada has a one year life cycle when in fact they live under ground for up to 8 years before they emerge. Because they emergence patterns are asynchronous they do not make as big of an impression. When it is time for cicadas to come above ground the nymph will dig to the surface, climb part way up the tree and molt into its adult form.

The periodical cicada get the most attention because of the grand synchronized emergence that occur every 13 to 17 years. These cicadas are in the genus Magicicada, which looks a lot like magic cicada. That is not too far off when you consider that no one knows exactly how they time their appearance. What is it that signals all the members of a brood to emerge at the same time? Some researches have hypothesized that it is a temperature shift, others believe it could be that the cicadas are tracking the seasonal changes in their host plant until they reach 13 or 17 cycles. It could be a combination of both or something else entirely but because they are so long lived it is hard to pinpoint the reason.  Regardless of how they do it, it makes an impact on anyone who is lucky enough to experience it. If you would like to learn more about cicadas there are plenty of websites dedicated to them. They are such enigmatic little creatures it is no surprise!

Hi this is Heather with your Insect Minute brought to you by WKNC and the NC State Insect Museum.
Do you love the sound of cicadas singing on a warm summer night? Typically the serenaders you hear are Dog Day Cicadas, which have broods that emerge every year. But, if you were in Wake County in the summer of 2011 you may have heard a different sound. The sound of hundreds of thousands of periodical cicadas singing in unison! These infrequent visitors are in the genus MAGICICADA. Magicicadas have an amazing life history. They live underground as nymphs for 13-17 years feeding on the juices they suck from tree roots. Then, in a synchronized emergence they take to the trees where they molt into their adult forms, feed and mate. Magicicadas have black bodies, orange wing veins and striking red eyes. The dog day cicada has green wing veins and lack red eyes, making the red eyes a key distinguishing character.
Guess what is coming in 2013? You got it; North Carolina will see another grand emergence of magicicadas. So keep your eyes to the trees and your earplugs at the ready!
If you’d like to learn more about the cicadas visit the museum’s website at insectmuseum.org where you find out more about the museum and read our blog where we talk about interesting stuff going on in the world of entomology.