Hello, The Noobhammer here to give you his weekly thoughts of metal, be it new reviews, startling news, or just whatever is on his mind. This is the first post of my round table, and many of you are probably thinking, “Hey Noobhammer, this seems awfully similar to ’Cannibal’s Corner.’” Well, it is, but it isn’t. Yes, this is an opinion blog, and we both may discuss what the other has said or written, by mine has a completely different feel to it. While Cannibal Cory’s may seem like a trip down to the basement with your good old friend Sweettooth, the homicidal clown that you love, mine is more of a gathering around a round table where we discuss magic…and dragons….yeah….

ANYWAYS! My first topic is a counterpoint to Cannibal Cory’s idea about Borknagar’s latest album, Universal.

First off, I have to disagree with my good friend Cannibal Cory. While he says that this album does not deliver the punch, I have to disagree. While the guitars may not be as intense as other black metal bands, Borknagar is not your typical black metal band. I have been listening to this band since Quintessence, and the mix of clean vocals with the harsh vocals is what really gives this band their edge. It has been four years since their acoustic album and six years since their last album proper, and this latest album is a return to form of sorts for the band. It flows very similar to their classic album Empiricism. Their music flows along the same lines as Emperor’s later work, and, as such, mixes brutality and beauty, which is what makes this album bloody fantastic. Yes, I do enjoy some of the heavier tracks, but sometimes, just like Swallow The Sun and Katatonia, the slower songs can be heavier and more brutal than the faster songs. So while this album may not appeal to everyone, fans of Emperor’s last album as well as black metal fans who love a little bit of clean vocals will love this album.

Let us continue onward with some album reviews for albums that came out this past month. Starting with Sabaton’s Coat of Arms: 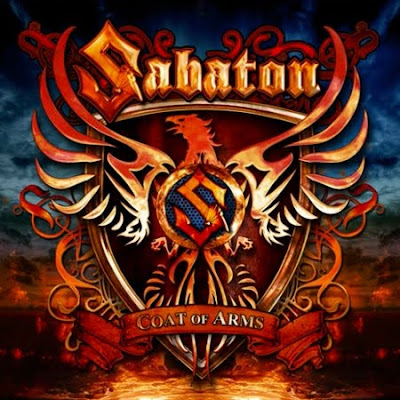 Sabaton return with another album chock full of inspiring music about various battles throughout history. First off, let me say that when you first listen to this album, you will have trouble putting it down for a few days. The songs are very catchy, and the choruses just make you want to raise your fist in the air and charge along the battlefield with the soldiers who fight in the song. By far, though, the opening track is the strongest song on the album. “Coat of Arms” opens up with a synth playing softly before the drums and guitars kick in and instantly make your head bang and foot tap. There are some songs, though sad in nature, will still make you feel powerful, like “Final Solution,” which describes prisoners’ feelings as they are walking through the gates of Aushwitz. It’s hard to say how long these guys will be around for though, because there are only so many battles you can sing about, and a lot of their songs vary little. Despite this fact, they can still write catchy songs that have us hooked.

Rhapsody of Fire return with their first album in four years, and it is a return for glory for the band. After being forced to change their name due to a lawsuit, their previous album, Triumph of Agony, was a big disappointment for me, especially because I am a HUGE Rhapsody fan. This latest album showcases the guitars more than the symphony. Some may see it as a response to the big hit of Dragonforce; I see it as a return to their glory days of the emerald sword. Few bands can compose and move us as well as  Rhapsody of Fire can. From the moment you here Christopher Lee (Yes, the Christopher Lee who played Sauraman in The Lord of The Rings movies) give his introduction to “the mighty, immortal warriors, RHAPSODY!” you will have a grin on your face and horns raised in the air. I won’t lie to you, I’ve had this album on repeat since  I got it. It makes me want to get on the back of my epic gold dragon, unsheathe my broadsword, and ride into battle with my comrades by my side as we search for the crystal of power. It is a truly epic album, and one that all power metal fans should get. LONG LIVE RHAPSODY!!

FINALLY! The new Nevermore album, The Obsidian Conspiracy, has finally been released. It has taken them five years, and, Odin, it was rough, I almost gave up on them. However, the band surprised me by releasing, not only a new album, but one hell of a new album. Seriously, this album is nearly flawless. The guitars have taken a backseat to Warrel Dane’s vocals, but that does not mean that the guitar shredding we love from this band is gone. No, rather it means that we get a great balance of both. For the first time since Dead Heart In A Dead World, I have been able to sing along with every song on the album. The songs are short but catchy, and their hooks just sink into you, and you will be humming the choruses to the songs all day.  It’s hard to explain in words how this album is, but I will say this: it is now a close contender for my album of the year, and Aealo by Rotting Christ is one hell of an album to top.

Well, that’s all I have for this week. Keep tunin’ in to Chainsaw Rock on WKNC 88.1, and be sure to prepare for the Newrockalypse this week as I will be playing songs from all the albums mentioned here. Keep the horns rising brothers and sisters.