I had the opportunity to acquire tickets to the Josh Ritter concert on Tuesday, May 11 at Carolina Theatre in Durham, NC through the amazing giveaways on WKNC.

We sat on the balcony level, which only somewhat took away from the concert’s intimacy, something I have grown fond of in some of the Triangle’s smaller venues. I knew the night would turn out well as I sat down and found the pre-show music to be Spoon’s Transference. The opening was an adorable 3 person folk group called  Dawn Landes and the Hounds, which I found out to be Josh Ritter’s wife’s band. Their pieces were upbeat and about memories, love and lollipops. They were all too excited to show off their new toy, those awesome bells you can play with your feet! I, along with the rest of the full house, really enjoyed their music and the energy they exuded. 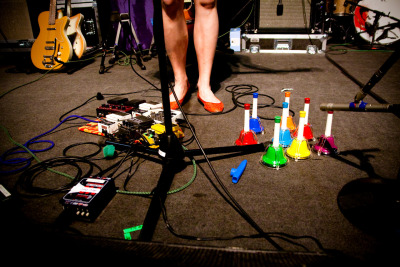 Interesting fact about Josh Ritter – he went to Oberlin College (a school I applied to!), intending to major in neuroscience. Instead, he changed his major to American history through narrative folk music. He certainly practiced what he learned in that small Ohio liberal arts college at his show Tuesday night. Songs about war, radio, old men, and stories of the stars filled the air. Ritter and the Royal City Band kept the crowd pleased, whether it be with mournful ballads like “Folk Bloodbath”, to more upbeat and borderline rock numbers, to the Josh Ritter I know and love with “To The Dogs or Whoever” and “Good Man.” No matter the genre of choice, the crowd was extremely responsive to the 5 person band. My only complaint is with the band playing background music at parts– clearly providing musical sounds not produced by any member of the band at that time.

Josh Ritter and the Royal City Band kept a consistent pace of music, usually allowing themselves one slow song and two upbeat folk or twanging southern rock. There was a different feel as Josh Kaufman, of The Hounds, recited Edgar Allen Poe’s Annabel Lee to a background of contra bass and steel guitar as provided by The Royal City Band as a set up for the Josh Ritter song “Another New World”. In between songs Ritter kept up a jovial banter for the audience– discussing mustaches, Baby Spice, and his need to brush his hair.

As Ritter left the stage, the crowd of course demanded more. Ritter then played a three part encore consisting of a song dedicated to Matt Douglas of The Proclivities, a love song that included all members of The Hounds and The Royal City Band behind the musical couple, Josh Ritter and Dawn Landes, and of course, “Harrisburg”.

All in all, Josh Ritter and the Royal City Band put on a great show. The crowd loved them, and all of the members of both bands seemed to rightfully enjoy themselves too.