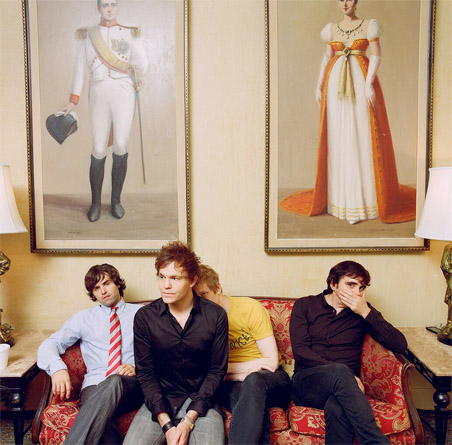 1. Morrissey made his return to his tour playing at London’s Royal Albert Hall on October 27, after his onstage collapse on October 24. The former frontman of The Smiths was taken to the hopsital after he experienced breathing problems and collapsed onstage during the first song of his set at Oasis Leisure Centre in Swindon, England. via (NME)

3. All of the members of Los Campesinos! have been diagnosed with H1N1 virus. The band announced all its members had been diagnosed via its Twitter account with, “ALL OUR BAND IS BEING DIAGNOSED WITH SWINE FLU” before its show in Leeds, UK. They followed up with, “AND WE HAVE TO GO ONSTAGE IN TWENTY MINUTES!!” The band has no plans to cancel any upcoming shows due to illness. via (NME)

4. The Cribs has released its cover of the Kaiser Chiefs’ “Modern Way.” The cover, which was initially released as the B-side to its 2005 “Mirror Kissers” is now available for download with the proceeds going to Cash for Kids Action on Neglect Appeal. The organization helps children who have been neglected in the Leeds and West Yorkshire area of the UK, where two of the members are from. via (The Cribs)

5. In another act of goodwill, a charity album which features Arcade Fire, Cat Power, Bon Iver, and Grizzly Bear has raised around $590,160. The album entitled “Dark Was the Night” features more than 31 tracks from various artists and the money raised from the album goes to The Red Hot Organization, which supports HIV/AIDS charities all around the world. via (NME)