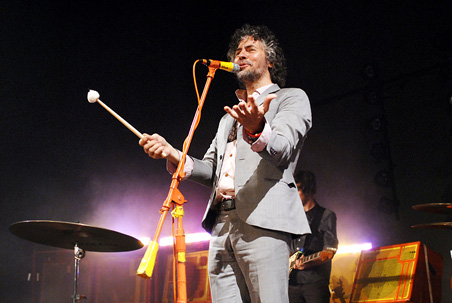 1. Ten British albums will be immortalized as UK stamps starting next January. The albums that will be featured include “Let It Bleed” by The Rolling Stones, “London Calling” by The Clash, “Led Zeppelin IV” by Led Zeppelin, “The Rise And Fall of Ziggy Stardust And The Spiders from Mars” by David Bowie, “Tubular Bells” by Mike Oldfield, “Power, Corruption & Lies” by New Order, “The Division Bell” by Pink Floyd, “Parklife” by Blur, “Screamadelica” by Primal Scream and “A Rush of Blood to the Head” by Coldplay.

2. At a Q&A session with fans, The Flaming Lips announced that they will follow up their release of “Embryonic” with a full-album cover of Pink Floyd’s famous 1973 album, “Dark Side of the Moon”.
via Pitchfork

3. The Strokes frontman Julian Casablancas will release his solo album “Phrazes for the Young” on November 3 instead of later this month. The release will soon be followed with a series of shows in the United States.
via NME

4. Alison Mosshart (The Kills) says that The Dead Weather are already halfway through recording their second album. She followed up saying, “In between now and Christmas I’m going to go back to [Jack White’s studio in] Nashville at some point. I think I’ll spend most of December in America and finish the second record.”
via NME

5. The White Stripes will be releasing out-takes from their first recording session. These include alternative takes of their 1998 single “Let’s Shake Hands”. However they are only to be released via The Vault, which is a part of Jack White’s label Third Man, and will only be available to platinum subscribers.
via Spinner