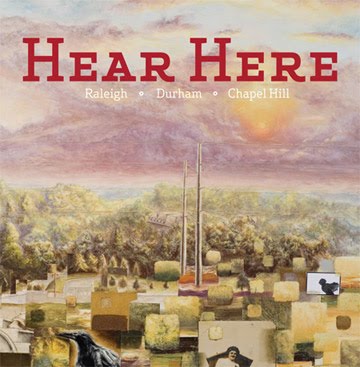 I’m going to level with you. We write these CD reviews to tell you if something’s good or bad. Whether the stuff in it works or it doesn’t work. Who it sounds like and who it doesn’t sound like. Yet this one, Hear Here: The Triangle, is a different animal. It’s quite literally my baby, our baby actually, seeing as you fund the student radio station that compiled it.

So how can I just pick this thing up with some stylized tweezers and plop it into a genre’s zip-lock bag? I can’t.
It’s too diverse and too unique to its creator. Like the old adage says- you never think your kid’s ugly. Well, I guess I’ll have to abandon the normal objectivity and just tell you how beautiful this kid is.

I bet if you crank this up while cruising down Hillsborough Street you’ll enter a time warp back to L.A., circa 1993. Blount Harvey’s “the Three” is an ode to big, beautiful women accompanied by soulful female vocals and Inflowential’s contribution, “Sherriff”, is a rendition of Marley’s classic reggae hit.

Keeping things particularly intense on the hard rock front are Colossus and Static Minds. With guitar virtuosity that’s taken straight from the Valient Thorr playbook and vocal power that rivals the late Freddy Mercury, Colossus reminds you exactly why they have a copyright on such an epic band name.

Not to be left out is Static Minds. Essentially, they’re the best proto punk band you’ll ever hear, the only difference is they’re from 2009, not 1969.

Here’s a rundown of the other local talents. The Love Language combines the best aspects of I’m From Barcelona and the Beach Boys.

Never’s “Littlest Things” is a crooning acoustic ballad, like a modern version of the Beatles’ “Because”. Despite the grisly implications of Kingsbury Max’s “Custer’s Last Stand”, the song feels very bright and shimmery.
It’s almost like you’re taking a whimsical monorail made of sunlight through a happier version of Dark Side of the Moon. And although Americans in France may give a nod to European aesthetics with their band name, the fuzzy chaos of “No Love For a Prophet” is pure grunge-era Sonic Youth.

I racked my brain over how to typify the other bands, most notably the Rosebuds, Hammer No More the Fingers, and Birds of Avalon. But then, I came to a realization.

Would the Sex Pistols have been punks if they grew up in Topeka? Would Johnny Cash have been the man in black if he lived in Manhattan? Would the B.I.G. be Notorious if he came from the suburbs? No. The fact of the matter is that local bands are great because they are ours.