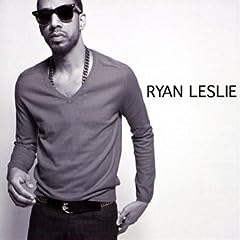 Every so often, music producers are able to make the transformation from behind the scenes to becoming a recording artist seamlessly. Such is the case with Ryan Leslie, who has emerged as a promising star in the R&B world, releasing what will be called one of the best R&B albums of 2009, the self-titled Ryan Leslie.

Leslie, a Harvard University graduate by age 19, was first signed to Universal Records, in 2003, and later released 2 singles, “Used to Be” and “The Way That U Move Girl”. The singles failed to chart, and the album, Just Right was shelved indefinitely. Without support from his record label, the singer, song- writer, multi-instrumentalist and engineer began to produce for acts including Cassie, Danity Kane, and Beyonce with the proceeds financing his own project.

Ryan Leslie, the long awaited debut entirely mixed, produced, written and arranged by Leslie and kicks this off with the up-tempo synth-induced retro R&B sounding “Diamond Girl”. On the albums lead single, Leslie sings of how he’s found the one that’s he’s ready to “put the rock on”. On “Diamond Girl” and throughout the album, Leslie does his fair share of rapping and it works.

Next up is the second single, “Addiction” featuring Bad Boy artist Cassie and Fabolous, where Leslie, explains his obsession with a lady love. The live multilayered arrangement makes it one of the albums best.

Following “Addiction” is “You’re Fly”, an ode to a woman Leslie feels is the pinnacle of beauty. The cut is reminiscent production-wise of legendary R&B group Frankie Beverly and Maze with its catchy melody and guitar riffs.

“Quicksand”,” Valentine” and the piano drive “I.R.I.N.A” are stand outs on the album. “Quicksand”, a funky groove which sounds like a Neptunes production, has Leslie telling how he is “emotional” falling deeply in an inescapable love, while the Keyboard-driven “Valentine” has Leslie professing his love to a prospective mate. The organ influenced I.R.I.NA, Leslie explains how love has no language barrier.

On “Wanna Be Good” and “Just Right”, Leslie tries out his falsetto invoking the spirit of Curtis Mayfield, while proclaiming how he lives to please the perfect woman for him.

The hard-hitting third single, ”How It Was Supposed To Be”, Leslie asks questions of what could’ve and should’ve been with a relationship gone awry, while the more melancholy while “Out of the Blue” and “Shouldn’t Have to Wait” have a more bluesy vibe and conjure of feelings of infidelity and commitment.

Closing out the album is the very appropriately titled “Gibberish”, seeing as you can only understand every 10th word. Vocoder and finger snaps in tow, Leslie expresses the moments of speechlessness that may occur when we meet that special someone.

Ryan Leslie overall is a mid-tempo feel good album with tales love and longing, featuring a combination of live instrumentation and heavily synthesized tracks. And although Leslie may not display the vocal acrobatics of Maxwell, his fresh approach, multi-faceted production and engaging lyrics make him one of the best chances R&B music has to survive, but only if he continues marching to the beat of his own drum.